Confessions of a Naturopath – Vol 1 No 3

Everyone who knows me, knows that I am really into fresh vegetables.  I have a vegetable garden at home AND at the cottage and I’ve been  known to have an obsession with canning, freezing and preserving.  I really can’t think of a vegetable that I don’t like (although cauliflower isn’t my favourite), but I do have one kind of strange preference…  I absolutely love frozen peas.  I mean, really love them.

When my clients tell me that they eat (ahem) frozen vegetables, they always look rather ashamed, as though they were admitting to a chocolate or potato chip habit.  While locally grown vegetables in season are clearly the gold standard, frozen vegetables shouldn’t get a bad rap.  Some studies show that the nutrient content of a flash frozen vegetable is actually superior to the same vegetable imported from out of country.  The unfortunate consequence of living in a northern climate is a lack of fresh food for more than half the year.  So rather than buying that $6 wrinkled red pepper or wilted broccoli from Mexico in January, try some of what I call “emergency vegetables”.  Quick, convenient and usually pretty tasty (particularly the peas), a frozen vegetable is better than no vegetable! 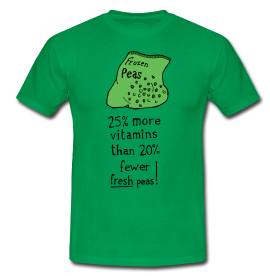 Our annual holiday closure is right around the corner - December 26th to Jan 2st inclusive.  We reopen on Jan 3rd at 9am.  Please ensure that your supplements are replenished to get you through the holiday!

Thanks for subscribing! We look forward to improving your health together!